The natural habitat for the Datnoid is fresh and brackish waters in Indonesia and Thailand. Datnoids are sometimes called Tiger fishes, since they display a tiger-like pattern on their bodies. They also have a habit of stalking their prey before they catch it, just like a Tiger does. There are four actual Datnoid species available to the aquarist. In addition to this, a lot of other fish species, such as the Red Datnoid, are called Datnoids and sold as Datnoids without being true Datnoids.

The Datnoid is a popular aquarium fish since it displays a very beautiful and eye catching pattern on its large body. A Datnoid aquarium must be quite large, since the Datnoid can grow larger than two feet (65 centimetres). Most Datnoids will however stay at a more modest length around one foot (32 centimetres). The Datnoid has an expected lifespan of 10 years in captivity. It can become very domesticated and tame, and if you spend some time with your Datnoid when you feed it, the fish will soon begin to recognise you and accept food from your hand. The Datnoid is usually very shy when placed in a new environment, but will grow bolder as it becomes accustomed to its home. A young Datnoid is typically much shyer than older Datnoids, and will often stay hidden for the first few weeks.

The aquarium should be filled with plants and hiding places, since the natural behaviour of the Datnoid is to stalk prey and hide among rocks and plants. Your Datnoid will appreciate grassy plants, since such plants make it possible for the striped Datnoid to melt into the environment and feel invisible. If you deprive your Datnoid of suitable hiding places it will spend most of its time hiding behind the filter or heater. Regular water changes must be performed since the Datnoid is sensitive to nitrates.

The Datnoid hunts by vigilantly stalking its prey and then unexpectedly open its large mouth and suck in the animal. The predatory nature of the Datnoid makes it an unsuitable companion for smaller species in the aquarium. Instead, choose fish that is to large to be considered prey by the Datnoid. The Datnoid is docile and non-aggressive and should therefore not be kept with aggressive species that will stress it. The Datnoid can sometimes be a little hostile to newcomers in the aquarium, but it will usually become friendlier as soon as it has grown accustomed to the new inhabitant. 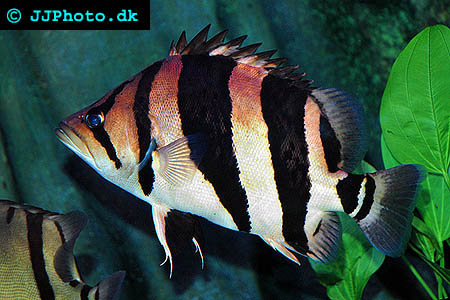 With a little coaxing, most Datnoid fish will eventually accept pellets and frozen foods. Live food is however highly appreciated. Datnoid fish is known to embark on sudden hunger strikes, but you can usually put an end to such behaviour by adding fast eating fish to the aquarium. When the Datnoid notice how the other fish is gulping down food, he will follow their example. Giant Danios are good companions for starving Datnoids, and so are other fast eating large barbs. 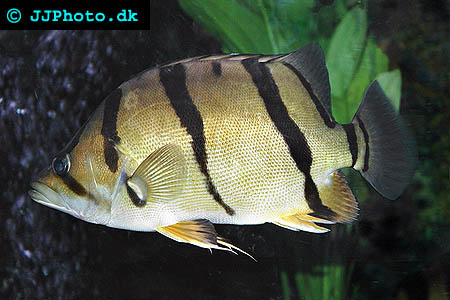