The biggest problem with these fish is that they are always hiding in the dark areas of the tank and hardly ever swim around at all. They are stalker feeders in that they lay around and wait until food comes swimming by. Baby brine and tiny guppy fry seem to do the job nicely. I often feed frozen brine but very sparingly as these fish stay put where they are. Each pair was placed in their own 10-gallon tank with some large female guppies, which supplied live food in the form of fry from time to time. The female's abdomen does bulge quite often but I never saw any other happenings. 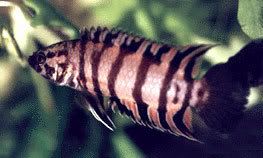 © Olivier Buisson
Soon I saw one of the males cowering in the corner so I figured it was time to remove him. I then placed a plastic floating food cover in the tank hoping the remaining pair would breed. Two days later I did see large pea size bubbles under the cover but nothing else.
I don't know if the bubbles came from the fish or the jumbo bubble-up box filter used. The next morning before the lights went on I spotted what looked like eggs suspended in the water and I quickly removed the parents. WOW! Are they tiny! I assumed the pair ate all the other eggs. The water was lowered very slowly to a depth of about 5 inches. All water removed was saved and checked for eggs or fry the next day. None to be found. Four days later I did find not more than eight or so very tiny slivers dashing about the water surface. The tank has a lot of green stuff that I think are called plants so I was lucky to see that many. There is some kind of dwarf Anubius, Java Fern and Java Moss all over the tank. YES; live plants. (For those who know me, this is very rare.)

I immediately began small feedings of APR (Artificial Plankton Rotifers) and spurlina powder. Since nothing else was in the tank, I fed very sparingly. About five days went by and a few of the slivers seemed to be getting larger so very small amounts of newly hatched brine shrimp was introduced to the tank. Another week passed and YES some were growing! It was very unusual as some were getting large and still others were staying very small so the powders were continued. Later that month I attended the OCA Cichlid Extravaganza and bragged to Ron and a bunch of other breeders that I had bred Ctenopoma ansorgii! Well did that backfire, as upon returning home I found that all the babies were dead. Boy was I cut down a peg or two.

This entire procedure was to occur two more times and I became very disgusted about the whole idea of ever getting any babies to live any length of time. After talking to my friends I received many more suggestions than I could count but I thought I would try to raise them up some other way. Years back I was given a Lima bean paramecium culture for some small rainbowfish I was trying to raise. Long since gone I had to start another one up again. It's a very simple job. Just fill a quart jar with aged aquarium water and toss in three Lima beans and wait about a week. Soon the jar is loaded with these minute buggers. When the bean gets mushy just take a culture start another jar but hold your nose.

I gave up on the pair and hardly ever made water changes until one day I felt sorry for them and took out 80% of the regular water and replaced it with straight RO water. The first spawnings took place in water at a temperature of 78 degrees with a 40 ppm hardness so I wanted to get it back to those figures again and very quickly. Guess what. I found those tiny fry again darting along the bottom of the tank. Once again the parents were removed but this time in went a half a turkey baster portion of paramecium. This time there was a large sinking yarn mop instead of all the plants that I had killed months earlier. Every day the paramecium was added but not many fry were seen. After about 3 weeks of this I did notice lots of growing fry but still very tiny. I can not impress enough upon you how tiny they are. By this time some live baby brine shrimp was added ever so sparingly. My theory was that these fry act just like the parents and wait until the food come within striking distance and I believe that's why I lost the first three spawns. They just didn't find the food. But just as before there are some larger ones and lots of smaller ones so I figure the food went closer to those that were growing. Two tiny albino Cory cats added died after only two weeks so I figured the Ctenopoma fry were eating almost everything offered. By this time I did see the larger fry starting to get that great orange color with some dark bars so my spirits were lifted a great deal.

Just from my own observation I believe that these fish don't always spawn in a bubble nest if they ever do. I think that's why there aren't many people who have had success with them. If I hadn't looked every morning with a flashlight and found the tiny fry I would have never known that they had spawned at all. I believe my pair is a mop spawner as I saw floating eggs only the first time which was well over a year ago. After 5 weeks a few had reached over ¼" and were exact miniatures of their parents. Once this size they seemed to grow much faster and I assume it was because they were able to eat the brine shrimp offered. They were originally so tiny that they had to be fed the paramecium 3 to 4 times daily as their small bodies can hold only a little food at a time.

Two months since I first noticed the tiny fry, most have grown to about ½ inch and all are starting to attain the same size. If you would like to try this beautiful fish I must say that it will not just happen and some day you will find fry swimming around the tank. It's a full time job and if you are not dedicated to them they will not survive. I have not seen any more fry since this last spawn but still I check for fry twice a day. The water must be soft and at a temperature close to 80 degrees and most of all, the newly hatched fry must be fed live minute foods at first and slowly changed to live baby brine shrimp. Tropical fish are fun to breed but this was the toughest species I have ever encountered.